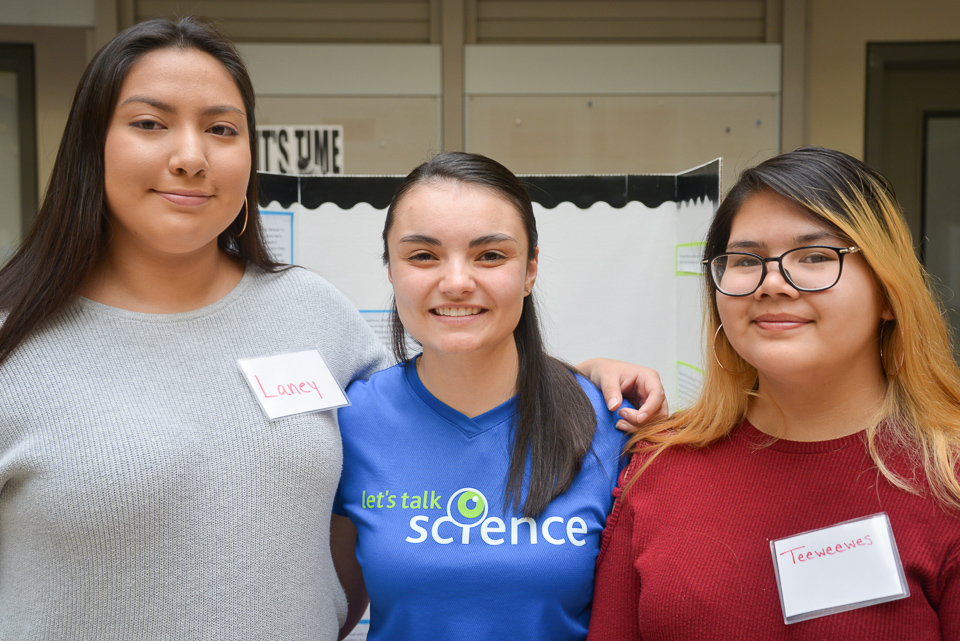 In March 2019, volunteer Kirsten Nelson was in a classroom in Attawapiskat, ON watching students squeeze mashed up graham crackers through pantyhose. The goal of the activity: simulate the digestive system. “They’ll never forget it,” she says.

Nelson had recently completed the Indigenous training program developed by Let’s Talk Science and was excited about the chance to apply what she learned while volunteering in Attawapiskat First Nation, a community in Northern Ontario at the mouth of the Attawapiskat River on James Bay. For one week, Nelson visited the community’s elementary school and high school, seeing every student at least twice.

The opportunity excited Nelson. This was her second trip to an Indigenous community, her first, four months earlier, was to Deer Lake First Nation, about an hour north of Sioux Lookout by plane, east of the Manitoba border. There, she spent a full week at an elementary school teaching students about dinosaurs, and building bridges both in-school and within the community.

Guided by the Truth and Reconciliation Commission’s Calls to Action, this training program provides staff and volunteers with a new level of knowledge and understanding of Indigenous histories, worldviews, and perspectives. The training program consists of six training videos with perspectives from diverse and esteemed individuals; a training manual and group facilitated discussions.

“I felt so energized after I left the workshop, that so many things were possible,“ says Nelson, a teacher, who is currently completing her PhD in math at Carleton University in Ottawa.

The Let’s Talk Science Indigenous training program helps to ensure that STEM learning experiences are as meaningful and transformative for Indigenous youth as they are for non-Indigenous.

“This training enables staff and volunteers to adjust activities to be respectful of Indigenous ways of knowing and styles of learning,” says Bonnie Schmidt, President and founder of Let’s Talk Science.

Let’s Talk Science is committed to providing meaningful and relevant learning experiences that are accessible to and inclusive of, all learners regardless of gender, geography, culture, language, abilities, and financial status. Since 1993, Let’s Talk Science has reached over 2,000 different communities across Canada, within every province, and as far north as Resolute Bay, Nunavut.

Last year, Let’s Talk Science continued partnerships in remote areas such as Moberly Lake, BC, High Prairie, AB, and Inuvik, NT. That included work with local schools and the communities at large.

“The kids look at you with big eyes, like what have you got in that magic bag,” says Nelson. “The kits are an amazing resource, they’re well thought out, and so aligned with curriculum expectations too.”

The training has been invaluable to Nelson who also volunteers with the Let’s Talk Science Aboriginal Mentorship Program that supports Indigenous youth at a high school in Cornwall, ON.

Taylor Jamieson, who is pursuing her PhD in oncology at the University of Ottawa also volunteers with these eager high school students. For Jamieson, who is Indigenous herself, the program can give younger students advice and inspiration.

A few times a year, Jamieson visits the Cornwall school to run activities and help a group of Indigenous students prepare for a science fair at the University of Ottawa. Throughout the year, the students can also contact Jamieson for overall guidance.

She has mentored a few students from Grade 10 all the way through the end of high school. One is now studying math at university, and another is in nursing school.

“Mentorship can always be helpful. But if you can see yourself in the mentor, someone with a similar background, you can say if they’ve figured it out maybe I can too.” – Taylor Jamieson

“A lot of the students are extremely shy,” she says. “The biggest outcome for me is if we reach science fair day and students who were shaking with fear are now happy, realizing they had fun and are fine.”

For Jamieson, volunteering with Let’s Talk Science has also improved her own skills in communications and presentations. Talking to young people about science could even give her a boost professionally down the road. “It might help me when it comes to speaking with patients,” she says, “as I’m considering going into pediatrics.”